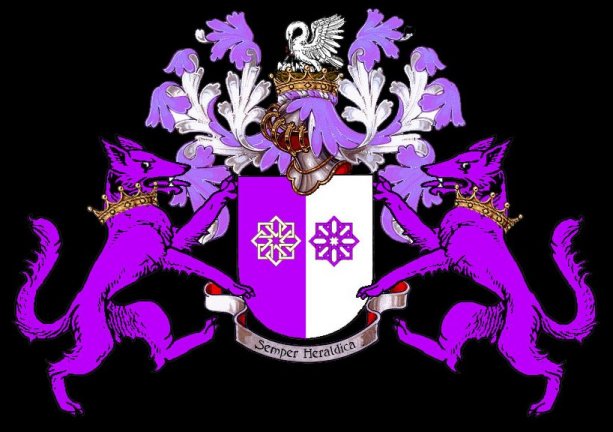 I have been honored by the Society and my Kingdom
with the following awards, titles, recognitions and accolades:

I also have a household in the SCA, known as House Leatherwolf.

The badge for it is blazoned: Per pale sable and argent,
three wolf's teeth issuant from dexter and as
many from sinister counterchanged .

Over the years I have taken on various individuals as students,
teaching them about heraldry. Since becoming a member of the
Order of the Pelican, I have begun taking protégés also,
aiding them in learning about service and their
endeavors to enrich and improve the SCA.

Most are from a variety of groups in Calontir, but some are
from other kingdoms. To see a list, click here.

Because of my many interests, I have several personas.
My main persona is:

My alternate personas include:

Because of these years of involvement, I have created the following webpages:

Forgotten Sea History
(check it out)

Hall of Remembrance
(in memory)

My wife, Briana, is very active in the area of Arts & Sciences,
especially making medieval clothing.

Our good friend, Jadwiga, is also in the SCA and is quite good
both at cooking and well as fiber arts.

To find out more about all this, check out these links:

Which are Arts and Which are Sciences ?

If you have an interest in
H.P. Lovecraft and the SCA
check out
House Fhtagn

If you MUST know about my non-SCA self:

To: Abney Park (If you really want to know about my favorite music group.)
[Click here for Abney Park YouTube Videos]

To: Football (I also have a great passion for professional football.)
[Click here for info on my fantasy football league]

To: Doro Web-page (If you really want to know about one of my favorite singers.)

To: Song Web-page (If you really want to know about my favorite songs.)

To: Cartoon web-page (If you really want to know about my favorite comics.)

To: WWI Airplanes (I have a great passion for World War I aircraft.)

Modar's SCA Page (and sub-pages) are published by Ron Knight (known in the SCA as Modar Neznanich)
for the edification of the members of the of the SCA, including the Barony of Forgotten Sea (and its cantons)
and the Shire of Cúm an Iolair.  It is not a corporate publication of the Society for Creative Anachronism, Inc.
and does not delineate S.C.A. policies. In cases of conflict with printed versions of material presented on
these pages or it's links, the dispute will be decided in favor of the printed version unless otherwise indicated.
Opinions expressed are those of the authors.

Argent, a pelican sable vulning itself gules, a bordure sable.

Home of the Black Pelican

* This pelican image is a slightly altered version of a picture from A Dictionary of Heraldry edited by Stephen Friar
(with illustrations by John Ferguson, Andrew Jamieson, and Anthony Wood), Harmony Books, New York, 1987,
pg 266, ISBN 0-517-5665-6